Domesticated cats have been the companion of humans for thousands of years and the bond between humans and our feline companions have not been broken ever since. While some of the most popular cat breeds are a result of the selective breeding process, some well-known cat breeds are from the earliest times of civilization. Click here for more information on the domestication of animals and plants. Here are some of the oldest cat breeds that are still around today and are the companions of countless individuals and cherished members of families around the world.  This blog will be all about Oldest Cat Breeds That You Can Still Adopt Today.

It is described as having the compactness of the Burmese Cat Breed and the elegance of the slim body of the Siamese which is also a very old cat breed.

Also, it is regarded as the fastest of the domestic cats because of its long hind legs and a unique flap of skin which enables its legs to stretch back farther and allowing it to run faster.  It can run at more than 45 km/h!

Although it is an old breed, it is by no means a wild cat or hard to handle, the Egyptian Mau is known for being an affectionate, loyal, and playful companion. They also love playing with water and can be lap cats. This breed also gets along well with children and other pets in the household including cat-friendly dogs.

The next is the Siamese Cat and the Korat which are natives of the Asian Country of Thailand formerly called the Kingdom of Siam until the 1930s hence the name of the cat breed.

The Tamra Maew is believed to have originated from Ayutthaya Kingdom which was in existence during the years 1351 to 1767 AD. This link: https://en.wikipedia.org has more information on the Tamra Maew or the Treatise on Cats.

Physically the Modern Siamese is known for its blue almond-shaped eyes and its elegant slender and elongated body and triangular head. However, the traditional Siamese Cat has a rounder body and head.

Today the Siamese Cat is one of the most popular breeds around the world is the foundation stock of other breeds of domestic cat including the equally popular Sphynx Cat, Cornish Rex, and Peterbald Cat Breed.

On the other hand, the Korat cat is known fortis unusual silver-tupped blue fur that appears to shimmer and is referred to as rain-cloud grey and has large green eyes and a heart-shaped head. Unlike its slender counterpart, the Korat Cat is known to be heavy.

Also unlike the Siamese, the Korat Cat has not departed from its ancestors as to its appearance.

The Korat Cat is believed to bring luck and is a symbol of good fortune in Thailand. Up until recently the Korat Cat was not sold but was only given as gifts to newlyweds or people who are about to go on an undertaking and those that are highly esteemed.

Both the Korat Cat and the Siamese are regarded as unusually intelligent cats. The Siamese is known for being very affectionate and are known for being social and are described as extroverts and bond strongly with a single person.

On the other hand, the Korat Cat likes living with other Korat Cats and is intelligent enough to have a system of hierarchy but the Korat Cat is also affectionate and is known to come home on their own and are playful.

The last is the Norwegian Forest Cat which is believed to be the descendant of cats that were brought by Viking Raiders to Norway from Grea Britain sometime after the year 1000 AD and other longhaired cats brought by Crusaders to Norway in the 14th Century. 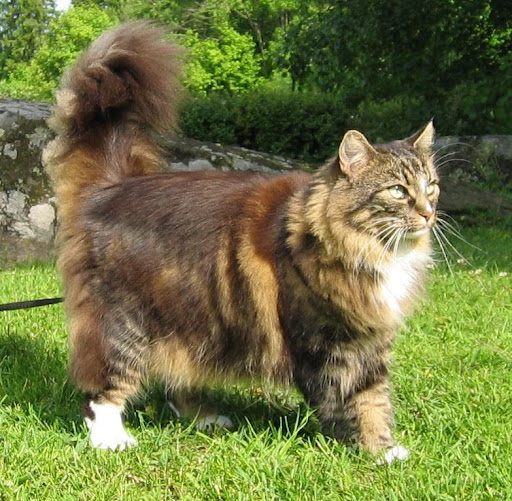 In Norway, the Norwegian Forest Cat is referred to as the Skogkatt is and is believed to be the breed of cat referred to in some Norse Legends. It is a big cat breed is known to have strong bodes with long legs and a bushy tail.

It has a long coat with a water-repellent top layer and a thick undercoat which was developed to survive the harsh cold weather of Norway and other Northern European Countries.

Despite its appearance, the Norwegian Forest Cat is friendly, intelligent, and playful with lots of energy. It is also fond of being with a family while not being demanding of attention and is satisfied with being in the room where people are. While being friendly, it may not be as affectionate and approachable with strangers. You can check the Holistapet kitties page if you want to know more about this breed.

To conclude there are still breeds of domesticated cats that have withstood the test of time and prove the cute appearance of these cats are capable of adapting to changes in the environment and the ever-growing relationship with humans.